It has been an eventful ride since I last updated these pages. I’m sure many readers of my blog will already know that our resolution asking BACP to discontinue its association with SCoPEd achieved an amazing 1780 votes, amounting to 3.5% of the membership. I fully expect (when the BACP finally respond to my request for the historical voting figures) that our resolution will have attracted the highest ever number of votes on a resolution.

An unprecedented membership engagement! Member interest clearly demonstrated. So when do we get to vote on the resolution at AGM? Well, we don’t. Two years ago, a resolution passed which asked the BACP to stop advertising volunteer roles on their platforms, the BACP said they “believed it was not the solution for addressing the wider employment issues.” and were clearly unhappy with its passing. The following year, the bar had been raised from 25 votes (around 0.05%) to reach AGM voting, to 5% of the membership, or roughly 2500 votes. 100x greater than the previous target.

To give an indication of the impossibility of the 5% target. Here are the statistics from the 2017 resolution which appears to have precipitated SCoPEd: 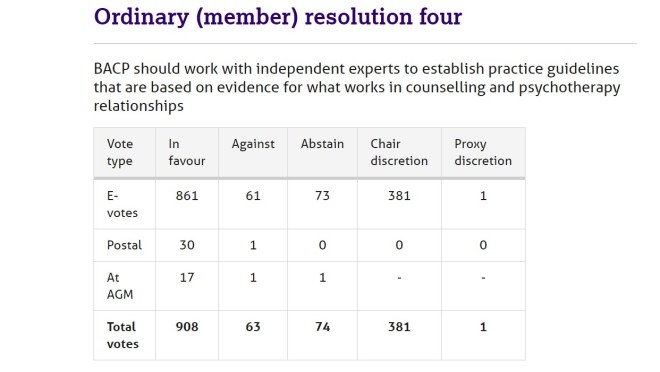 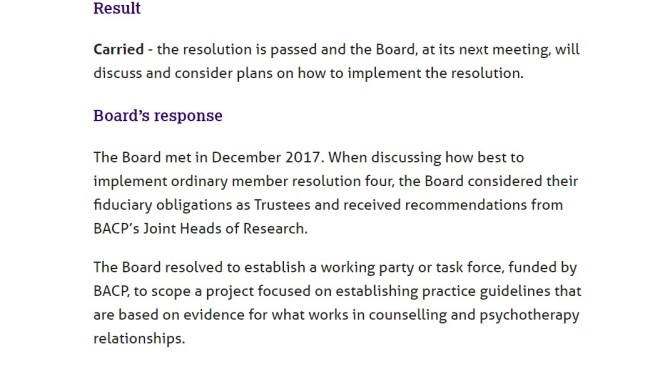 So at this crucial second stage of voting, (having received the 0.05% needed to get to this stage), this resolution passed with approximately 1.89% of membership support. If this is indicative of the levels of general membership engagement, our 3.5% was spectacular, and 5% seems an impossible and prohibitive target. It should be highlighted that the purpose of the first stage is to indicate membership interest in the topic. If members haven’t demonstrated their interest over the last few months, I don’t know what ever will.

In spite of the disappointing result, a great deal of good has come from the campaign. The original implementation date for SCoPEd was expected to be spring 2019, and I believe this period of ongoing consultation, and addition of…erm…one person centred therapist to the psychoanalytic-leaning ERG is, in no small part a result of the organised way we have been able to hold the BACP to account. That is a massive achievement in itself.

I want to talk a little bit about the way in which the SCoPEd discussion has played out on social media. It seems to me, in parallel to national events, the emergence of SCoPEd has exposed deep divides within the profession, and, perhaps surprisingly, those divides have translated to some quite uncomfortable exposure of the professional shadow, in my view.

There has been a lot of ‘othering’ of colleagues online during the discussions around SCoPEd. It seems to me that each side sees the other as outrageous and wrong, when actually, I suspect we all actually want what is best for clients, and need to develop a respectful way to articulate our differences, and listen to others regarding the ways this might be achieved. I have seen glimpses of respectful discussion, for example, in my online conversations with Andrew Reeves, but not nearly enough. I think it is the responsibility of everyone to do better.

I would particularly like to highlight the weaponising of armchair diagnosis to discredit colleagues; having been on the receiving end of this myself, I can tell you it is the most horrendous abuse of power, and has been deeply hurtful to me personally. I have seen speculation about unconscious motivations appear on both sides of the debate. I would like to see something introduced to the BACP ethical framework, similar to the APA’s Goldwater Rule, which specifically addresses public diagnosis and speculation on the psychological processes of others. I think that publicly pathologising to discredit those legitimately seeking to bring an issue to a membership vote is a serious ethical breach, which raises questions about our attitude to pathology and to activism as a profession.

In this, I also note the position of power that the BACP finds itself in when it assumes the responsibility to moderate online debate. It took the BACP days to close the thread on their Facebook group, by which time there had been 109 comments. In my view, this is an enabling position which amounts to complicity in contributing to my personal distress. The Psychotherapy and Counselling Union have expressed concern about the BACP’s handling of this issue on my behalf. The response from the organisation so far has been wholly unsatisfactory in my opinion. I will happily share their response on my blog, once I have pre-warned the BACP of my desire to do so, and offered them the chance to make further comment.

After the resolution results came through, I received an email inviting me to join the SCoPEd team for a meeting, in order to start a dialogue. I have not had positive experiences of one-on-one engagement with the BACP with regards to SCoPEd and the power imbalance I am likely to experience in attending such a meeting by myself is befitting of the power issues inherent in the whole process of SCoPEd. I have not said yes or no to such a meeting yet; I am considering my options, and of course will provide an update on this either here, or on other social media.

I want to give my heartfelt thanks to Tara Shennan, who has also faced a lot of flak in putting this important topic to a members’ vote, as well as the brilliant organisations Counsellors Together UK, Psychotherapy and Counselling Union, Psychotherapists and Counsellors for Social Responsibility and The Alliance for Counselling and Psychotherapy, who have been so generous with their time and support throughout this process.

The road does not end here. The BACP have expressed a desire for a dialogue, and I will do my best to make sure that can happen in a fair and safe way. There is a lot more campaigning to do; I await the second iteration with interest, and there are many of us on hand to ensure it receives the careful analysis and scrutiny it requires.